There are a few things I can be relied upon as a trusted, credible source. 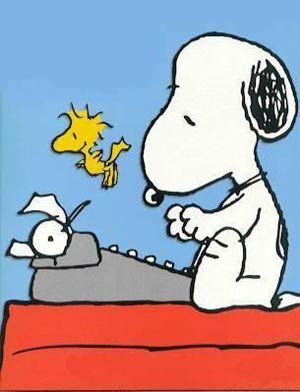 The only way to offer advice on writer’s block is to have suffered. And I HAVE suffered. Here is what works for me…

It goes like this. Just pretend you’re writing. Tap, tap, tap. There you go. Look at how prolific you are! How fast you type, how resolute your effort. It doesn’t matter if it’s any good. It’s just to heat up the frying pan.

Sometimes I’ll actually write things like “In this scene, XYZ goes to visit ABC at the bar and they fight,” just to get going. The motion is what matters.

If I’m still not there, I start to flesh out my play-by-play outline. Still nothing? I describe the bar or one of the characters. That always puts me in the mood. (Description is my personal writing vice. Alas, nobody cares about the details as much as I do.)

The point is to create inertia. Then, at one point your brain will poke it’s head in the door and say, “Hey. What’s going on in here?” And pull up a chair.

2. Shake and Bake It – The Incubation

Sometimes writer’s block happens because you have taken something as far as it can go for that day. This isn’t an excuse. The common advice is to sweat through the creation constipation but that can result in self-inflicted head wounds. But my brain is often still working when I close my laptop. And when I pick it up the next day, I’m on. Just make sure to actually pick it up the next day. It’s easy to slip from writers block to procrastination. (We’ll talk about that later. It also happens to be an area of expertise for me.)

If putting your project aside feels like a cop-out, or if you do have a deadline, start in another spot. Skipping around is not the method of the disciplined writer, right? But if you’re already being unproductive and it gets you unstuck, what is there to lose?

Another technique to get me in the groove is to reread what I wrote the day before. I find that sitting down and staring at a blank page produces two things. Firstly, I end up using a different tone, voice, or style than I had been writing in. This is usually based on my mood, energy level and surroundings. I like the refresher to put me back in the right voice anyhow.

And secondly, a blank page is a lot of pressure. A white, glowing screen, pure with possibility is fun… when I’m feeling literarily fertile (that’s a thing, right?). But when I’m stuck, it just makes me nervous. Going back reminds me that I do have a reasonable degree of writing prowess, despite how it feels at the moment.

4. Jack It – Caffeine, Nectar of the Writing Gods

Seriously. The cliché about writers in cafes is not unfounded.

Lastly, all forms of screaming, temper tantrums and pouting are acceptable, even expected, if you are a writer so feel free to throw yourself on the floor and kick in circles until you feel better.

2 thoughts on “Writer’s Block – How Not To Write”